Most people really believe that Leviticus has no bearing on their life.  I get that.  I understand that the very word ‘Leviticus’ makes most of us feel uncomfortable and weird, like any moment I’m about to start talking about ‘uncleanness’ and sacrifice, (which I kind of am).

But we can’t tune it out.  Because when we look at the book of Leviticus we see things that might be the key to setting us free from guilt and shame.

If we’re reading the Bible ‘right’, then we know that Leviticus is as much about the gospel as the book of John.  When we read through the Law we find a greater and clearer understanding of the grace of God in the face of Christ. 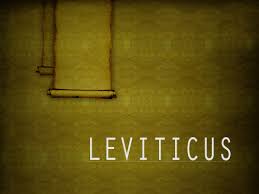 We all say we believe and trust the gospel, but when we look at our experience of the world, it mostly reflects the world of the Old Covenant; the world of Leviticus.  So the question for today is:

Imagine a little boy born and raised in Kenya.  All around him he sees the world of Kenya, but he has been taught his entire life that he lives in America.  As a result he believes that Kenya is America.  He believes with his whole being that he is American through and through.  In fact, in his mind the ‘far away’ land of Kenya is as mystical to him as Timbuktu.

One day he finds an old tattered national geographic magazine hidden away in the corner of his attic.  He pours over the pages, drinking in all the descriptions of different cultures and countries.  It shows pictures of what life is like in multiple places, including Kenya and American.  It describes the experiences one might have in both countries.  As the boy reads about the differing nations he realizes that, despite what he has believed, despite what he has proclaimed, he actually lives in Kenya.

We may believe and proclaim we live in the land of Jesus, but when we describe our experience of this world, it sounds an awful lot like the land of Leviticus.

Obviously, as Christians we all believe we’re living under the Jesus Way.  We all profess to trust in the sacrifice that actually covers are sin and we proclaim to trust in the mediator who actually is able to help us.

But let me describe the two ‘countries’ here so we can figure out which one sounds more like our world:

If you lived under the Leviticus way, here’s what your world would be like:

If you lived under the Jesus way, here’s what your world would be like: