If you’re like me, not a day goes by in which you don’t sense the deep desire for glory inside your soul.  I want to be seen as valuable. I want to be honored and exalted; I want to be wrapped in approval. 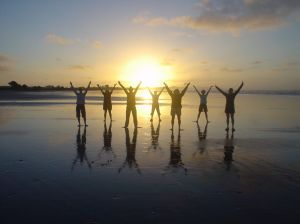 I’ve searched from top to bottom, but the Bible doesn’t seem to speak of my desire for glory as evil.

Don’t get me wrong, He despises it when I turn to created things to satisfy that desire.  He talks about turning to the approval of man or worldly success as if these things will destroy me.  But we have to recognize, that not only does God not condemn our longing for glory, He actually communicates to us in His word that we are MADE from glory and we are actually commanded to SEEK glory.

We were made from glory.  Part of the reason we have this hunger for exaltation and glory is because we began with honor and exaltation.  Back at the start of this whole thing when God created man and woman, He gave them their first ever job description:

“Be fruitful and multiply and fill the earth and subdue it and have dominion over the fish of the sea and over the birds of the heavens and over every living thing that moves on the earth.”  Genesis 1:28

Okay, so that’s crazy, right?  God didn’t tell us: ‘hey guys, start out with ants. If you can steward ants well, then I’ll let you rule over lizards.  We’ll have a job review performance and if everything shakes out, you might be promoted to snakes…’  No, we started existence being God’s number two.  We were given the job of ruling over every single thing that lives and breathes on the earth.

We were given this position of honor and exaltation because we alone were created in the image of God.  What an honor!  Think on it for a second.  We are the only created being to bear the image of our Maker, carrying His characteristics around and displaying them.

We have fallen indeed from a great height.  All the insecurity in our hearts, the hunger for glory is in there because there was a time we walked with the God of the universe and ruled over every thing He had made.

Our souls long to return to the rightness of that place.

God calls us to seek Glory.

He will render to each one according to his works: to those who by patience in well-doing seek for glory and honor and immortality, he will give eternal life; (Romans 2:6-7)

He gives eternal life to those who fit this job description: ‘who, by patience in well-doing, seek for glory’.  The mark of a believer is that we seek glory.

Listen carefully.  Our hunger for glory is dangerous.  It leads us to rebel against our Father.  But, if we let that danger  lead us to try to destroy the desire itself we will have just disqualified ourselves from the description of the elect.

If we miss this, we will miss being satisfied by God.  Jesus says so:

How can you believe, when you receive glory from one another and do not seek the glory that comes from the only God?  (John 5:44 ESV)

The word ‘believe’ doesn’t mean mental ascent.  John is talking about a deep and delicious satisfaction in Christ.  Jesus is saying to you:  you will never be satisfied by Me as long as you (1) receive glory from one another and (2) do not seek the glory that comes from the only God.

You want to be satisfied in Christ?

Stop receiving glory from one another.  If you even receive glory from people you won’t be satisfied in Jesus.   If people have the ability to speak into you in such a way that it adds to your sense of value and worth, you will never know the sweet peace of finding yourself satisfied in Jesus.

We have to put to death the part of our heart that lights up when someone ‘important’ remembers our name.  We have to wage war with the desperation need to be wanted and liked and pursued by a guy.  We have to seek the destruction of every piece of us that secretly or functionally believes our worth comes from the right job title, promotion or spouse.
But even if we could accomplish all that, we would still find ourselves left with a ravenous desire to be approved of and be valuable and significant.  No amount of starvation from the world will make that desire go away and nor should it.

The hunger for glory was given to us by God to spur us on to fulfill the second part of the verse. If we want to be satisfied in Jesus we must seek the glory that comes from the only God.

Here’s where it gets sticky.  What does it mean to seek glory from the only God?  How can we possibly seek glory without making this thing about us?  How can our pursuit of glory lead to God’s glory?
Well, gang.  Tune in tomorrow…